Amphibians they are vertebrate animals They are characterized by their bare skin, without scales.

In this article we will explain all the secrets of these animals, starting with the reproduction of amphibians, the types of amphibians that exist, some examples and other curiosities that are sure to be very useful to you.

La amphibian fertilization occurs in fresh water, because this type of water is going to be the one that protects the eggs during their development and allows amphibians not to need embryonic attachments, such as the amniotic sac or allantois, hence some of the characteristics that differ from other terrestrial vertebrate amphibians.

Fertilization to the external being follows a characteristic process: the male holds the female, who is laying eggs. As these come out, the male goes spilling their sperm on them and fertilizing them. The eggs remain in the water forming cords or attached to aquatic vegetation. Aquatic larvae emerge from them again. 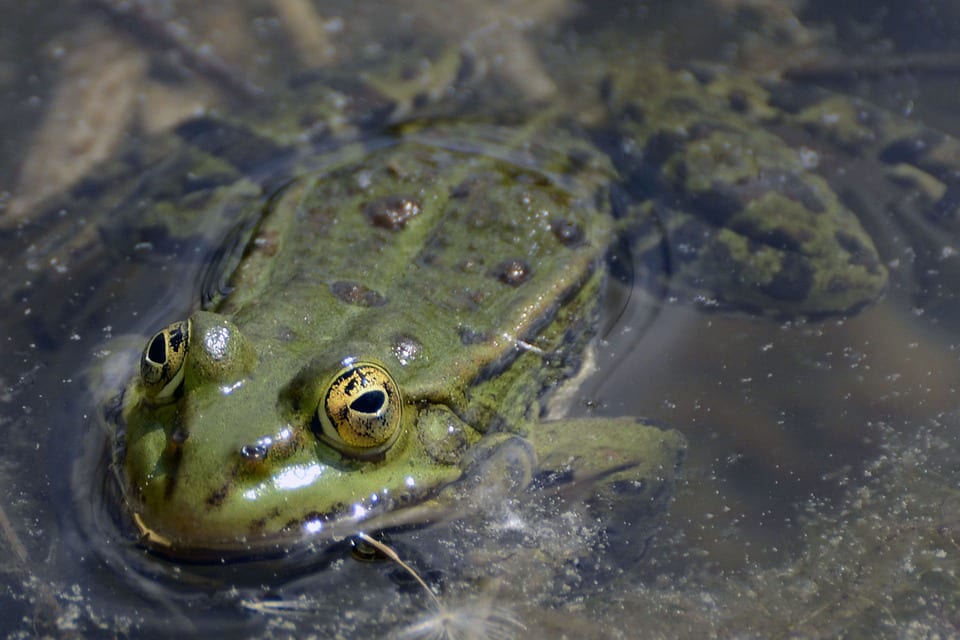 Both in fish and amphibians, in which external fertilization predominates, the eggs have a thin cover, since the spermatozoa must cross it so that the fertilization takes place. For this reason, these eggs must be put in the water glued to each other, forming voluminous clusters.

Amphibians are born as a aquatic larva that travels with a tail and breathes through gills. When the larva, called the tadpole, has grown sufficiently, it undergoes a process of total metamorphosis. With the exception of a few species of rainforest frogs, these features will eventually disappear and will be replaced by lungs and legs as the tadpoles grow.

This class of vertebrate amphibians is made up of frogs, toads, salamanders and aquatic caecilians. These amphibians have the ability to live both in and out of the water, although they need to be constantly wet as it is their means of breathing.

Amphibian animals, what are they? 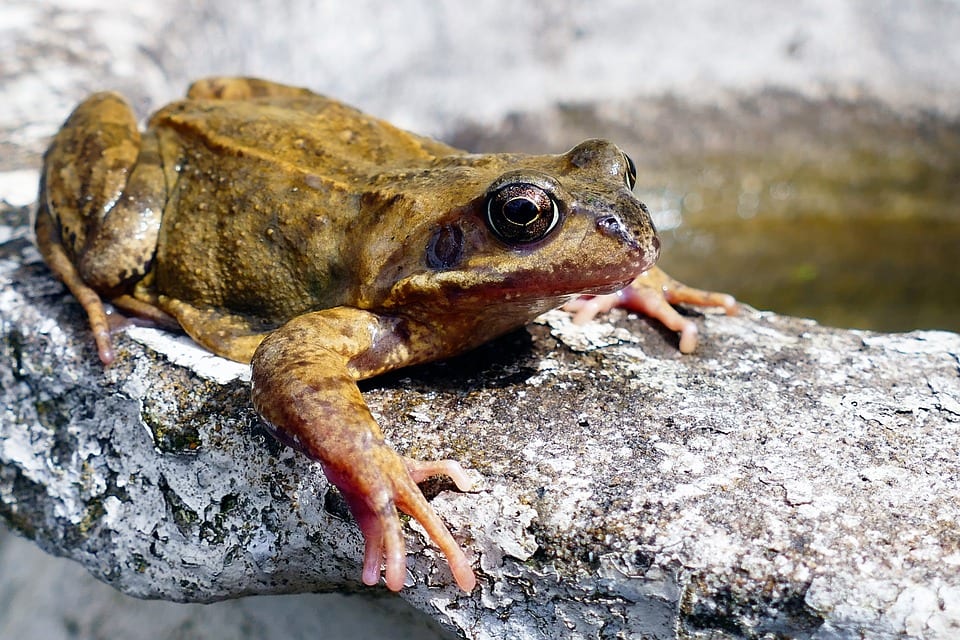 In Latin the word amphibian has a peculiar meaning, it literally refers to “two lives”. And this is a distinguished peculiarity of these animals, capable of adapting and carrying out their biological functions in two different ecosystems: land surface and water areas. However, we are going to delve a little more into the meaning of amphibian.

Amphibians are part of that great family of living beings classified as vertebrates (they have bones, that is, an internal skeleton) anamniotes (Your embryo develops into four different envelopes: the chorion, the allantois, the amnion, and the yolk sac, creating a watery environment in which it can breathe and feed), tetrapods (they have four limbs, ambulatory or manipulative) and ectothermic (They have a variable body temperature).

They have a period called metamorphosis (transformation that certain animals undergo during the biological development stage and that affects both their morphology and their functions and lifestyle). Among the most prominent changes experienced is the passage from gills (new) to lungs (adults). 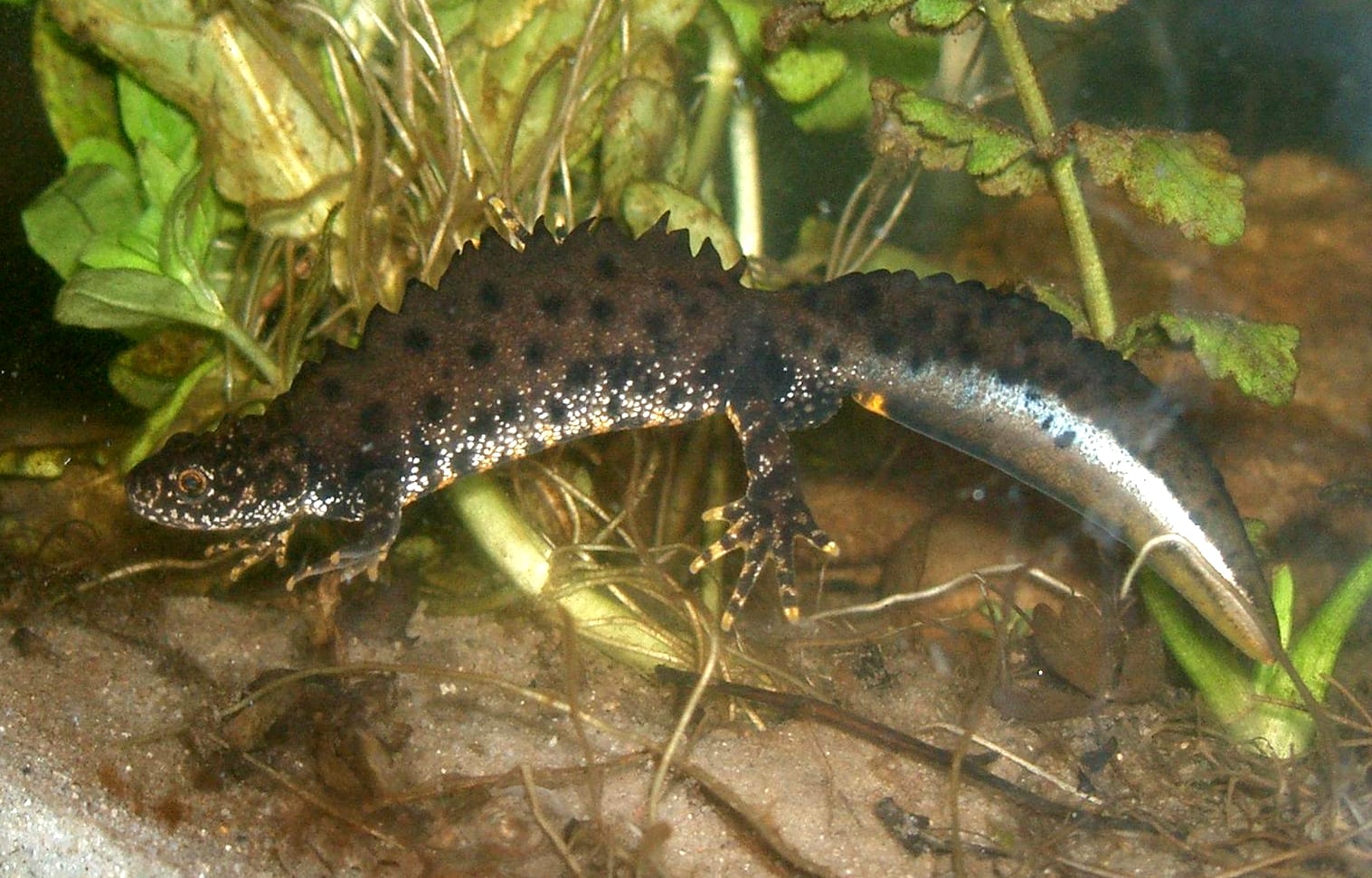 Within this great family that amphibians make up, we can make a small classification based on three orders: anurans, caudates o urodeles y apodal o gymnophiona.

The urodeles They are other types of amphibians differ by having a long tail and an elongated trunk. Their eyes are not excessively developed and are covered by a fine skin. Here we find the newts, salamanders, proteos and mermaids.

Finally, there are the types of apodal amphibians, which are the most peculiar of all due to their appearance. They closely resemble a worm or earthworm because they have no limbs and their body is rather elongated.

As we said before, amphibians are vertebrate animals, and they have the "privilege" of being the more primitive of this class animals that inhabit planet Earth. They are said to have been around for around 300 million years, almost nothing!

They have four limbs: two front and two rear. These limbs are known by the striking name of dear. The quiridus is characterized by having a morphology similar to the hand of a human person, with four fingers on the front legs, and five on the back ones. Many other amphibians also have a fifth tail-like limb.

Being living beings of cold blood, their body temperature depends, and a lot, on the environment in which they are, since they cannot regulate their internal heat. This is one of the causes of force majeure that has led them to adapt to life in water and on land. These two systems help you avoid overheating or cooling your body.

Shipping is oviparousas they hatch from eggs. It is the female in charge of depositing these eggs and she always does so in an aquatic environment, hence the young specimens have a respiratory system that has scales.

The skin of these organisms is permeable, being able to be crossed by diverse molecules, gases and other particles. Some species are capable of secreting toxic substances through their skin as a defense system against external dangers.

Even focusing on your skin, it should be noted that this is damp and depopulated with scales, unlike other types of animals that do carry them. This circumstance allows them to properly absorb water and, consequently, oxygen. On the contrary, it makes them very vulnerable to the processes of dehydration. If an amphibian is in a low humidity environment, its skin will dry out quickly, which can lead to serious problems and even death.

These animals have a circulatory system whose main part is a tricameral heart composed of two atria and one ventricle. Its circulation is closed, double and incomplete.

The eyes are usually bulky and, rather, bulging, which facilitates a large field of view very appropriate when hunting potential prey. There are exceptions like newts.

Although it may not seem like it, amphibians they do have teeth, even though these are rare. Its function is to help hold the food. The tongue also becomes a perfect instrument to capture other small animals. They present a tubular shaped stomach, with a short large intestine, two kidneys, and a urinary bladder.

At present, there are cataloged around some 3.500 amphibian species. However, scientists, in their estimates, predict that the total number may be around the 6.400.

When we think of amphibians, the image of a frog or a toad always appears in our heads, but we also have other animals such as newts and salamanders.

These are just a few examples of amphibians, although, of course, there are many more:

This type of salamander is also known as axolotl or purepecha achoque. It is an endemic species, that is, it only exists in a certain place. In this case, it only lives in the Zacapu Lagoon, located in the state of Michoacán (Mexico).

It is mainly characterized by having a rather thick body, short tail and gills. Its orange or red color, added to its black spots that extend throughout its entire body surface, makes it not go unnoticed.

This animal is located mainly in European territory, specifically in the north of Spain and in the east of France. It has a greenish coloration accompanied by very striking greenish tones. In addition, its back is crossed by a very peculiar vertical line of red pigment.

It is very common to find it in almost the entire continent of Europe and part of Asia. Prefers habitats composed of stagnant waters, irrigated areas, etc. Perhaps, being so resistant to living conditions in unsanitary waters has made it one of the most widespread and well-known amphibians. It does not have bright colors, but rather its skin is of a "brownish" tone, covered by several bumps in the form of warts.

Like its relatives cited above, this amphibian has also made Europe and Asia its home. Although it prefers humid places, this frog spends much of its time out of the water. It does not belong to a fixed color pattern, but each individual can present different colors. Despite this, brownish skin with small spots tends to predominate. The pointed snout is one of its hallmarks.

The content of the article adheres to our principles of editorial ethics. To report an error click here!.

It may interest you